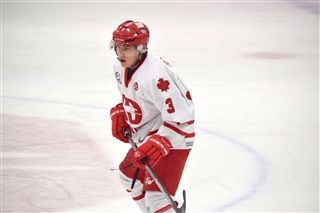 11/20/2017
Hockey Canada
CALGARY, Alta. – Hockey Canada and the Canadian Junior Hockey League (CJHL), with assistance from NHL Central Scouting, have zeroed in on a list of 100 players from across the country who are invited to selection camps in advance of the 2017 World Junior A Challenge.

From Dec. 2-5, 40 Team Canada East hopefuls will gather at the MasterCard Centre in Etobicoke, Ont., for four days of scheduled games and practices as part of Team Canada East’s evaluation process.

“A tremendous amount of work has gone in to this process of talent-identification by our Team Canada East staff since the beginning of this season,” said Paul Currie (Stratford, P.E.I.), director of operations for Team Canada East. “It was an incredible effort to go from 70 teams across the five eastern CJHL leagues to this group of 40 players, and we are looking forward to a very competitive camp as we look to narrow down this talent pool to a final 22-player roster that will represent the team in Truro next month.”

Team Canada East, the 2016 silver-medallists, will open this year’s tournament against Russia in prime time on Sunday, Dec. 10, when the World Junior A Challenge returns to Atlantic Canada this December.

Team Canada West’s coaching staff and its director of operations, Kevin Saurette (Winnipeg/MJHL), will use the selection camp to make their final evaluations – with input from the camp’s guest coaches – before naming Team Canada West’s final roster.

“As a group, we are very excited at the depth of talent, character, and work ethic of the 60 players that have been identified for selection camp,” said Saurette. “We look forward to watching these players earn the opportunity to represent Team Canada West at what will be a very competitive selection camp. It is always a difficult process to narrow down and identify 60 players from the five leagues in the West, and I commend our coaching staff on all their hard work, dedication, and professionalism through this process.”
Team Canada West will open its tournament against the Czech Republic at 3:30 p.m. AT on Dec. 10.

Full-tournament packages – which give fans the best value at $175 (including fees and applicable taxes) and are the only way to secure reserved seating (all other ticket options will be general admission) – include all 13 tournament games and are available online at  HockeyCanada.ca/Tickets, in-person at the RECC, or by calling 1.888.311.9090. An Evening Game package, which includes a general admission ticket to all six evening games plus the gold-medal game, is now also available in limited quantities starting at $99.50.

Beginning on Friday, Dec. 1, all other ticket options will also be available, including single-game tickets, a $25 Day Pass valid for single-day use Dec. 10-14, and a Family Four-Pack for $49.50.

The RECC Arena in Truro will also host two pre-tournament games on Friday, Dec. 8. At 3:30 p.m. AT, the Czech Republic will take on the Truro Bearcats, while Team Canada East will play Team USA at 7:30 p.m. that same evening. Team Canada West and Russia will travel to nearby Amherst for a 7:30 p.m. pre-tournament game on Dec. 8 as well as a warm-up to the official puck-drop on the World Junior A Challenge on Dec. 10. Tickets for the pre-tournament games will go on sale Dec. 1 at HockeyCanada.ca/Tickets or at the RECC Arena and Amherst Stadium box offices.

The World Junior A Challenge is made possible thanks to the partnership between Hockey Canada, the CJHL, and NHL Central Scouting, and features two Canadian teams, representing East and West, as well as four international teams vying for a gold medal. Nine of the 11 gold-medal games at the World Junior A Challenge have featured at least one Canadian team. Team Canada West won gold at the first two tournaments, in 2006 and 2007, and also took home gold in 2011 and 2015. The team also won silver medals in 2008, 2009, and 2012, as well as bronze in 2013. Team Canada East won silver medals in 2006, 2007, 2010, 2011 and 2016, as well as claiming the bronze medal in 2008.