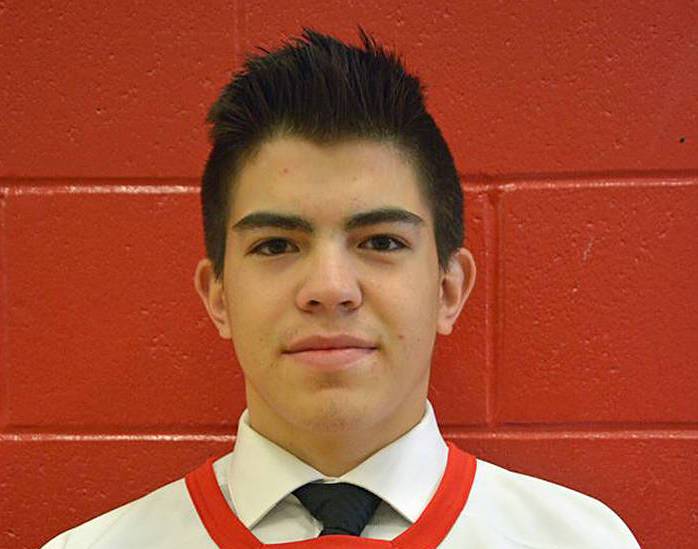 Chance Longjohn'16 started out in Maskwacis and is doing well in Jr. A hockey

10/13/2017
JEFFREY HEYDEN-KAYE
Ever since Chance Longjohn picked up a hockey stick, the sport seems to have flowed through his veins.
Now he’s the captain of the Notre Dame Hounds Junior A hockey team in Wilcox, Sask. It’s the first time a First Nations player has taken on the role.

Longjohn, who is from Maskwacis, plays in the Saskatchewan Junior Hockey League and is also working on his post-secondary education.

Growing up in Maskwacis, Longjohn was encouraged by his parents Gina and Tim to get into hockey. He first started out with rollerblades at the young age of three and four, before he laced up his skates.

From there, it seemed like a natural progression. “I would play hockey all year round. I started playing hockey maybe at six or seven years old.”

Now in his third year with the Hounds, Longjohn is having a stellar year being voted on as captain.

“Hockey was the biggest part of me moving out here (to Wilcox),” explained Longjohn.

He headed to Saskatchewan to start off his midget year and to continue his love for the sport. Last season in Junior A Longjohn got his letters and this year the assistant job and he was voted to captain.

The road to captaincy wasn’t an easy one. Longjohn said his first year in juniors was filled with learning and many challenges along the way. It was an uphill battle but he found his stride eventually.

The 20-year-old centre not only loves the sport, but he also hopes to show other First Nations hockey players there’s many opportunities for growth and success. He hopes it will pave a new way for other athletes.

Longjohn is also grateful to his parents who have supported him throughout his hockey career. He says they’ve travelled to games for hours to support him when he was young and even today.

When they can’t catch him at a game, his parents subscribe to a hockey channel that features Longjohn’s games.

In the last three years with the Hounds, Longjohn has played 118 games with 29 goals and 38 assists. The next step is to get an academic scholarship and play in NCAA Division 1 hockey.