9/29/2017
By Matthew Cullen , CBC Sports
﻿
Hockey is always changing.
The players are getting bigger, faster and stronger. But any professional hockey player will tell you it takes more than simple skill to make it to the big leagues.

It takes heart, maturity and character.
On Tuesday in Saskatoon, a panel of current and former players offered testament to the role Athol Murray College of Notre Dame played in their development as the school played host to the inaugural For the Love of the Game to celebrate amateur athletes in sport.
The event featured a panel discussion with four Notre Dame alumni: former Carolina Hurricanes captain Rod Brind'Amour, current Hurricanes prospect Hadyn Fleury, and former Canadian Olympians Barry MacKenzie and Terry O'Malley.
Based in the small prairie town of Wilcox, Sask., the Notre Dame Hounds are in their 98th year and boast a rich history in developing professional hockey players. 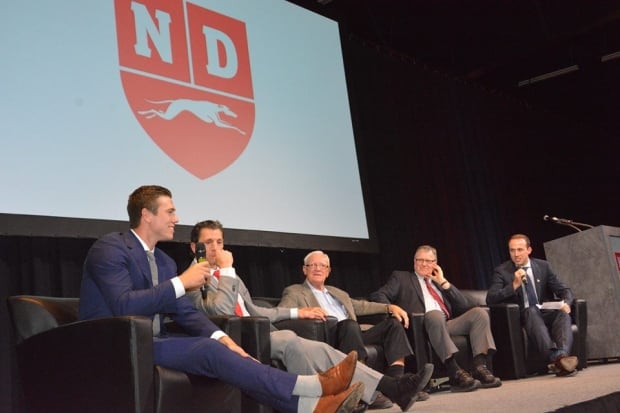 From left to right: Carolina Hurricanes prospect Hadyn Fleury, Hurricanes assistant coach Rod Brind'Amour, former Olympians Barry MacKenzie and Terry O'Malley share a laugh on the panel at 'For the Love of the Game' in Saskatoon. Matt Cullen, far right, of CBC Sports was the panel moderator. (Athol College of Notre Dame)
Dozens of NHLers have graduated from the school, including former goaltender Curtis Joseph, Blues forward Jaden Schwartz, Islanders centre Jordan Eberle and Maple Leafs defenceman Morgan Rielly.
How does a small school 30 minutes south of Regina have such a rich hockey history?
For Rielly, it was the lessons he learned which made him a better athlete and a better person.
"In my two years at Notre Dame, I learned a lot of life lessons," Rielly told CBC Sports. "It is a place that you go into as a kid and you graduate as a man." 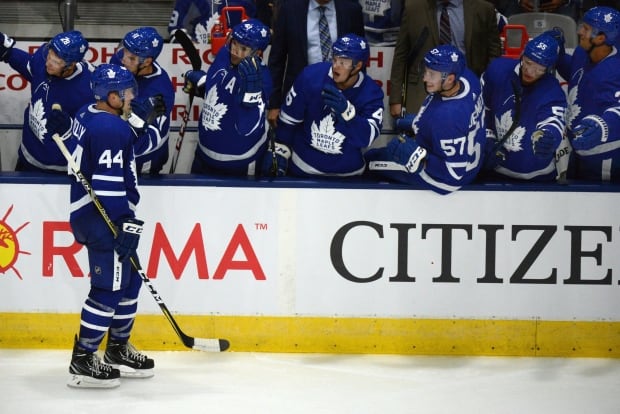 Notre Dame alumnus and Toronto Maple Leafs defenceman Morgan Rielly, left, is entering his fifth season with Toronto. (Jon Blacker/The Canadian Press)
For Rielly, the move from West Vancouver, B.C. to Saskatchewan as a 15-year-old was one of the most difficult periods for him.
"The hardest time was when I moved away in Grade 9, the rest was easy," the now 23-year-old said. "When you look down at the list of guys that have been to [Notre Dame] and had great success, it makes you want to do that as well. It makes you want to follow in their footsteps. … It is not very hard to be motivated in a place like that."
Despite the long list of alumni who played pro, attending the Notre Dame hockey program doesn't guarantee success. Many amateur athletes across the country have to face the pressure that comes with setting aside other commitments to play high-performance sport.
Brind'Amour arrived at Notre Dame in 1985 as a Grade 10 student. He played for three seasons, including captaining the Junior A Hounds to a Centennial Cup — now the RBC Cup awarded to Canada's top Junior A team. 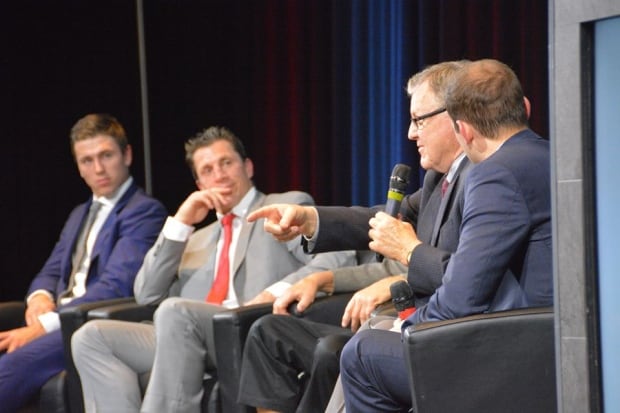 Haydn Fleury, left, and Rod Brind'Amour, centre, listen to Terry O'Malley speak on Tuesday in Saskatoon. (Athol College of Notre Dame)
A former first-round pick of the St. Louis Blues, Brind'Amour played 21 NHL seasons for the Blues, Flyers and Hurricanes, highlighted by leading Carolina to its first Stanley Cup in 2006 as the team's captain.
"There is pressure [in amateur sport]," Brind'Amour said on Tuesday. "There is no hiding that. Some people can deal with it. A lot of people can't. … In my experience, pressure is a good thing. It doesn't matter what field you are in. If you are in hockey, if you are in business, there is pressure everywhere. You have to learn how to handle that. Notre Dame has helped me learn how to do that."
Brind'Amour is now in his seventh season as an assistant coach with the Hurricanes and has the opportunity to watch the 21-year-old Fleury develop as a prospect with the organization.
Fleury spent two seasons at Notre Dame but will always remember his first NHL memory — being welcomed to the NHL by Brind'Amour and the Hurricanes at the 2014 NHL draft in Philadelphia.
"That was pretty special," Fleury said of Notre Dame connection when Brind'Amour called his name as the seventh overall pick. "I'll always remember that."
The defenceman from Carlyle, Sask., played last season with the Hurricanes' AHL affiliate Charlotte Checkers. Fleury said his experience at Notre Dame helped him to deal with the pressure of playing high-level hockey, including representing Canada at the 2016 IIHF World Junior Hockey Championships in Finland.
"Before you get to [Notre Dame], you are just that little kid. But when you leave, you are much more mature and ready to deal with adversity," Fleury said. "Maturity and character was the biggest part. The drive to win that was instilled in me made me strive to be a better person. It allowed me to deal with situations better than [other young players.]"
Although Fleury got a tough test of what life is like in the NHL — in particular against Edmonton captain Connor McDavid — in Wednesday's pre-season loss to the Oilers in Saskatoon, Brind'Amour has been impressed with the young defenceman's development.

"Getting to know [Fleury] over the last few years and watching his maturity grow, he's not a kid," Brind'Amour said. "He's a grown man. He's big. He's tough. He knows how to handle himself. His future is bright."
Back