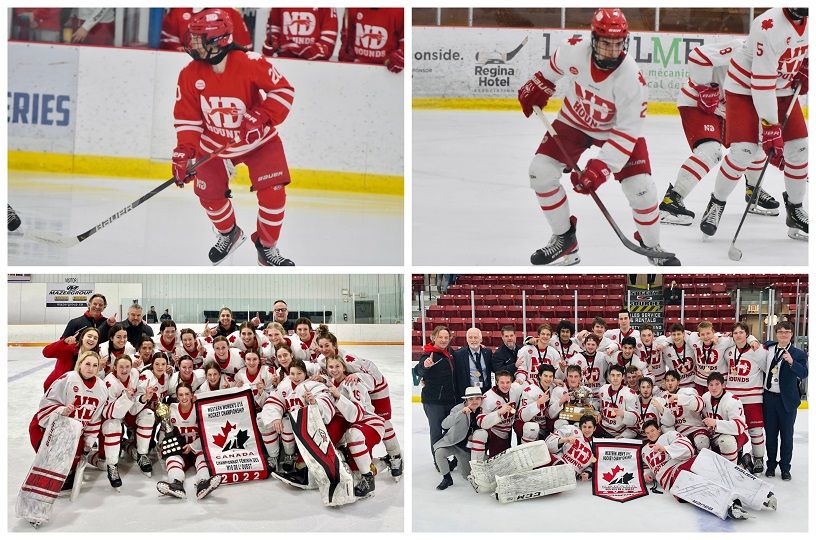 Journey to the National Championships a family affair


The College of Notre Dame is going for the double at the simultaneously occurring 2022 boys and girls U18 National Championships, and while the Hounds consider themselves one big family anyways, one player on the boys’ squad, and one on the girls are literally that.
The Merriman twins, Keagan and Keara, have been around the college in Wilcox most of their lives, and have both attended ND since Grade 9 in 2017.
And now they are going for the Telus and Esso Cups at the same time.
“It's a really cool opportunity for our family,” says Keara, a forward on the U18AAA Hounds girls, “something that (likely) won't come around ever again.
“For it to be in our grade 12 year at Notre Dame makes it a lot better. In some ways it makes it less stressful and easier with both (of us) competing at nationals with our respective teams, (in that) there's another team that going through the same type of high competition you are. Even during the playoffs, the male and female teams would come and cheer each other on, and it makes you play better knowing you have a whole school behind you. It is just one of the special things about Notre Dame.”
Keara and the Hounds girls bashed their way to the Esso Cup with a No. 1 seed in Saskatchewan and with only two defeats in 10 post-season contests, including a sweep of the Manitoba champions in the regionals. Keagan and the boys dominated similarly, parlaying their top seed in the province into sweeps through the Sask final, and the regionals in Virden, MB.
For Keagan, who has already signed on to play in the Saskatchewan Junior Hockey League with the Hounds Junior A next year, and like many who don the red and white of the Hounds, the opportunity to add to the great legacy of winning at the college is not lost.
“The hockey program here at Notre Dame continually produces teams that win,” says the U18 boys forward. “Both teams making it to both Telus and Esso this year is just yet another accolade to add to the already extraordinary resume the hockey program has developed. One of the many reasons Notre Dame has kept consistent with its winning ways is the opportunities it gives each and every player to develop their skills, both on and off the ice. Whether it be through the use of the state-of-the-art skills centre, on-ice skill sessions or the weight training gym.”
The last time both Notre Dame U18AAA teams were in this spot was back in 2010, when the Hounds boys, then as now coached by Del Pedrick, came away with the gold medal in Quebec, while the girls came home with a silver just down the road in Regina.
Keara, and the girls coached by Notre Dame Female Hockey Co-ordinator Craig Perrett, feel that while they have a remarkable, dominant campaign, their mission is far from accomplished.
“To get the chance to play in a National Championship means a lot, (and) growing up in Wilcox and being a four-year Hound makes it more special,” she says.
“You really see just how hard it is for a team to reach the national championship. Nonetheless, two teams in the same year, it’s a special opportunity that (we) won't take for granted. It’s one thing to make it to a national championship, but there's still work to be done. You just want to live in the moment and take in everything as it's going to be a euphoric atmosphere in Okotoks.”

Del Pedrick echoes Keara and Keagan's sentiments on how special an opportunity this is. “This is a lifetime opportunity for both teams to be competing for National Championships in the same year and in the same arena," he says. “It is extremely rewarding to share this journey with our current players as they carry the traditions & legacy of Hounds before them.  This accomplishment speaks to the effort of the entire Notre Dame staff in building successful young women and men both on and off the ice.”

Adding to the family element of the Hounds' teams competing at the National Championships are the two father-daughter combos in Kevin and Breanna White, as well as Craig and Ryann Perrett. Kevin is the assistant coach for the boys team while Breanna is a defenseman on the girls team. Craig will compete for a championship alongside Ryann, a forward on and captain of the team.
Both clubs will head west on the morning of May 15, with both tournaments set to open the next day. Both Hounds squads will open against the respective Atlantic Champions from the Maritimes, the males against the Moncton Flyers, at 3:00 P.M. MDT on May 16, and the females against the Northern Selects of Pictou, NS an hour and a half earlier.
The Gold Medal games of both events are scheduled for May 22 and will be aired nationally on TSN.
Back