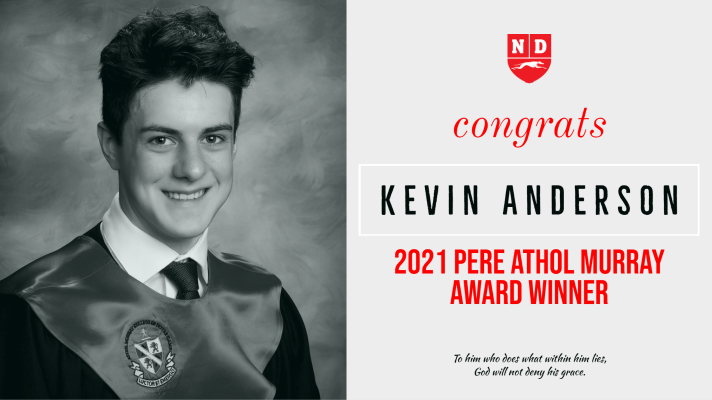 The Award is presented to the Notre Dame student who best exemplifies the characteristics, principles and ideals of Father Athol (Pere) Murray:
The award also recognizes the individual's respect for his/her peers and the larger community, along with sensitivity to social and cultural values.

2021 Pere Murray Award Recipient | Kevin Anderson ‘21
Kevin Anderson is a four-year Hound, a House Leader and someone who is highly regarded by his
fellow students, and by Notre Dame faculty and staff.

Kevin is a leader as a student, as a hockey player and as a friend to his fellow Hounds. He
encompasses all the characteristics and ideals of Pere himself - humility, respectfulness, spirituality,
honesty and commitment.

Kevin is an inspiration and role model to others with his work ethic in both academics and hockey.
He has maintained a good balance between his academic and athletic lives. While playing Junior A
hockey as a Grade 12 student, Kevin has maintained top academic marks. Through his own
dedication to bettering himself in all aspects of life, Kevin pushes others to become their best selves.

He exudes positivity and is a caring person, especially when it comes to helping out his fellow
students. He is a shoulder to lean on for many. As the lone House Leader of Seaman Hall, he
demonstrates his leadership and spirituality by being responsible for the students in the dorm. He
leads by example in his relationship with God and holding his peers accountable for their own
actions.

Kevin makes the Notre Dame campus a warm and welcoming place for everyone. He is a young man
of great character. He believes in the mission and vision of Notre Dame and is an excellent
ambassador for the school both on and off-campus.
Back