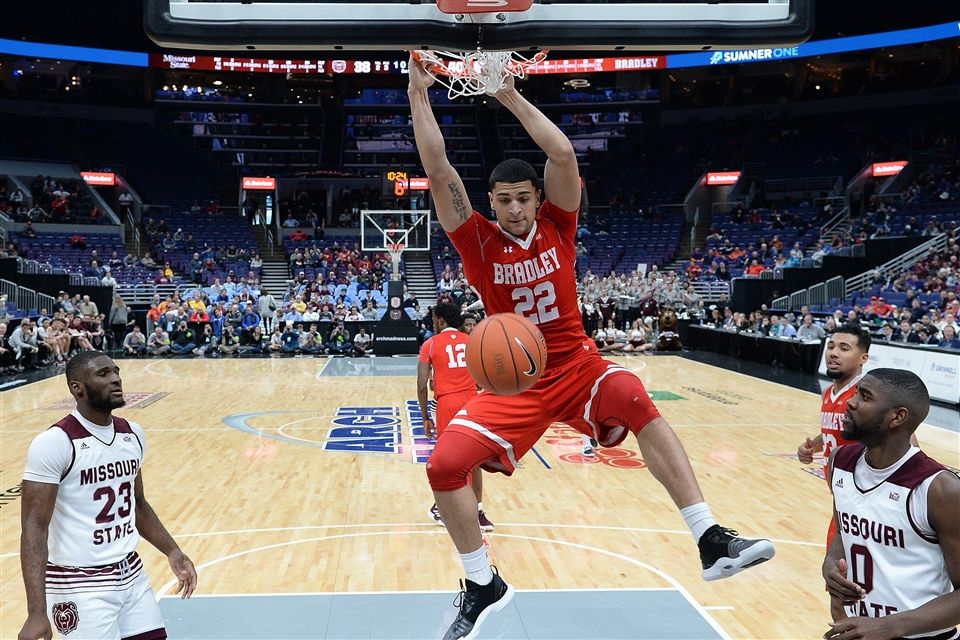 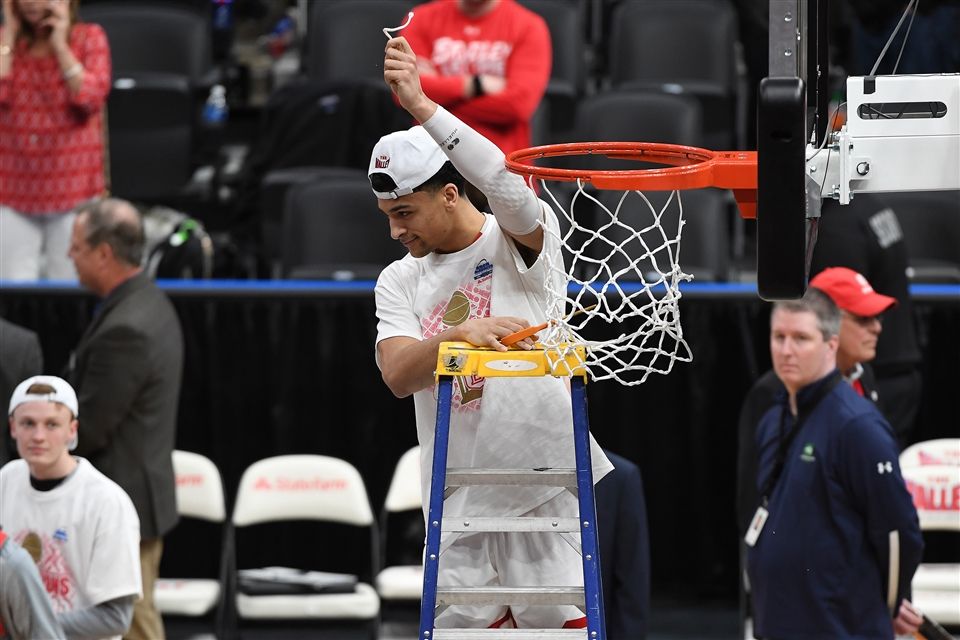 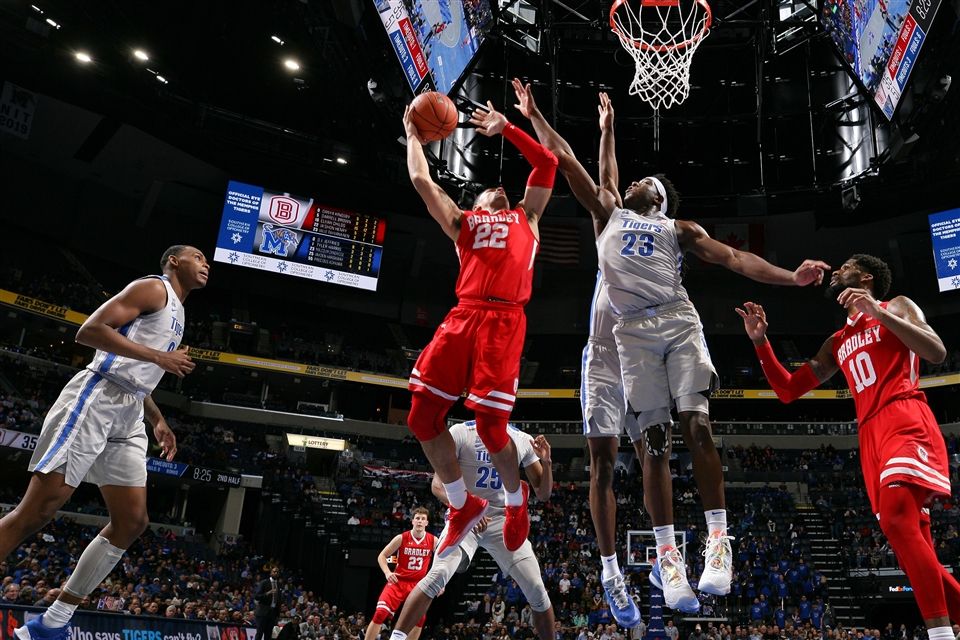 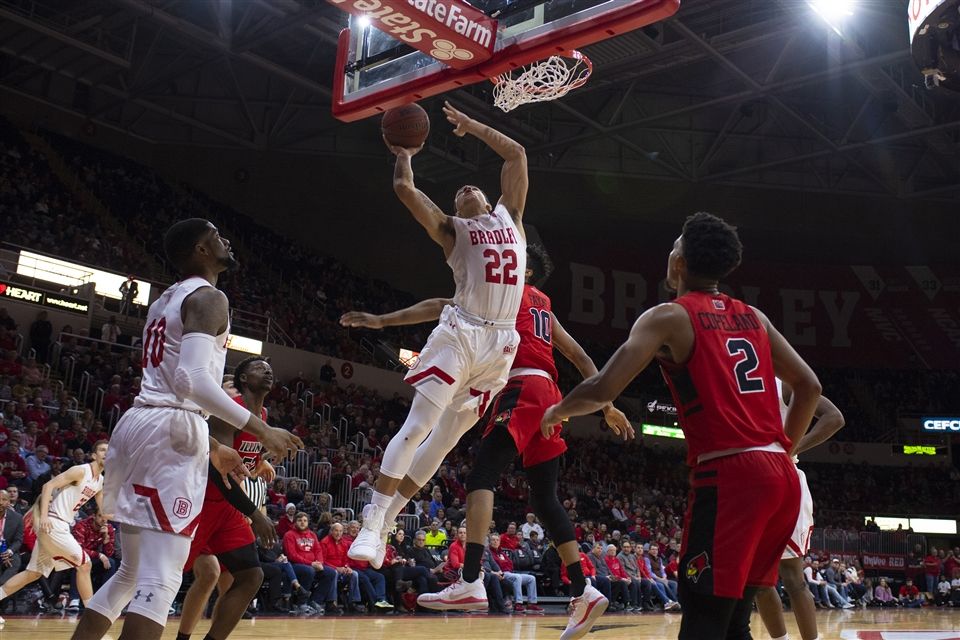 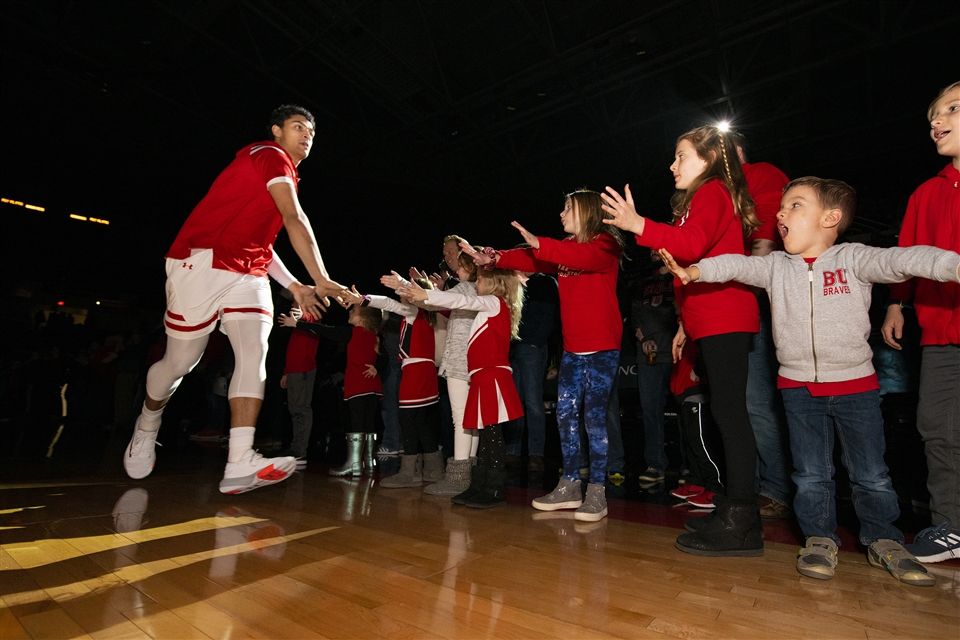 NCAA DIV. 1 Ja'Shon Henry’17 on how Notre Dame prepared him to be a Student-Athlete

1/22/2021
Athol Murray College of Notre Dame
The No. 15 seed Bradley University Braves men’s basketball team went ice cold.
They needed a basket, so who did they turn to? Ja’Shon Henry, a freshman straight out of the Athol Murray College of Notre Dame.
It had all started so well in their Round 1 NCAA Basketball Tournament clash with the mighty No. 2 seed Michigan State Spartans. The Braves had gone 4-for-5 from the floor from the tip and taken a 10-4 lead that Mar. 21, 2019 day in Des Moines, Iowa.
But then they went 0-for-5, and the Spartans looked like they were going to roll. Enter the proud ND alumnus.
Bradley guard Luqman Lundy held the ball at the top of the arc, flipped it to his right for Henry, and the 6-foot-6 freshman did not hesitate. The Saskatoon-native quickly attacked MSU’s Xavier Tillman, a strong, experienced power forward, who is at the time of writing a member of the NBA’s Memphis Grizzlies, and chipped in well-earned lay-up.
The Braves were ultimately beaten by a Michigan State crew that also featured Washington Wizards’ pick Cassius Winston, despite the fact they were up with seven minutes left on the clock, but the experience is one Henry will never forget.
“I remember it as clear as day,” says Henry, over the phone from school in Peoria, Illinois.
“I remember just running on the court seeing thousands and thousands of fans… it was really surreal and crazy to be a part of that. It was really good, from the up and down season that we had that year, that we were able to put ourselves in a position to compete at that stage (after winning their Missouri Valley Conference championship), and really hold our own against a team like Michigan State.”
Two years on from that day, at the time of writing, and Henry is poised to be a Braves leader while a junior. He went from averaging four points and 12 minutes-per-game as a rookie to almost 10 points and 24 minutes as a sophomore last year, before the Coronavirus ruined his chances to get back to the pinnacle of U.S. College Basketball.
In spite of his personal success south of the border, Henry is quick and enthusiastic to credit his time at the college in Wilcox, SK.
“Notre Dame just builds leaders,” he says, “it builds character.”
“It’s written almost everywhere in that school that ‘Hounds Have Heart’; and if you go out there, and compete every day with heart and passion, anyone can be a leader for your classmates and teammates. So, I think Notre Dame prides itself on that, and I'm really glad I chose to go to that school for those two years.”
Bradley University is also a school known for its academics, where Henry is majoring in retail merchandising, and minoring in marketing. Just as with his athletic success, he gives a large nod to ND’s focus on the classroom as a critical source of growth as well.
“Notre Dame definitely switched my mindset on how I handle my schoolwork,” he says
“They made sure I was doing it all on-time, and doing it to the best of my ability. Honestly, the life in Wilcox had a huge influence on me coming to college in the first place, and it made my (transition to post-secondary education) a lot easier.”
The struggles Henry has had to contend with extends past being a Canadian player in a firmly American-dominated basketball landscape, since not only is he from the ‘Great White North’, but hailing from an even more non-traditional basketball centre like Saskatchewan has implanted in him an even larger drive to succeed.
Henry and his Braves will open their 2020-2021 schedule at a pre-season invitational event hosted by perennial powerhouses Xavier University in Cinncinati, Ohio, before beginning their regular campaign Dec. 1 at home in Peoria vs. Judson University. The team’s international flavour goes beyond the Sasakatoonian, as a Cameroonian, a Finn, and a Dutchman all start on the squad.
With his expectations high, both personally and for his team, Henry appears a far way off from forgetting where he came from.
“Notre Dame is a school filled with athletes and students,” he says, “where pretty much everyone is driven so hard to succeed.
“Having that environment around you consistently, you start to build good habits because you see other people go to the gym, you see other people taking extra reps, or watching film or, taking care of their body. Just in my two years there, I saw so much growth in myself that I just wanted to perfect my craft; ND was so important in helping my life and game translate when I got to college.”