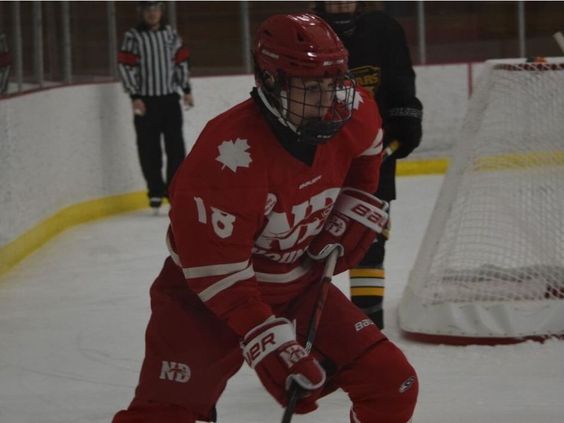 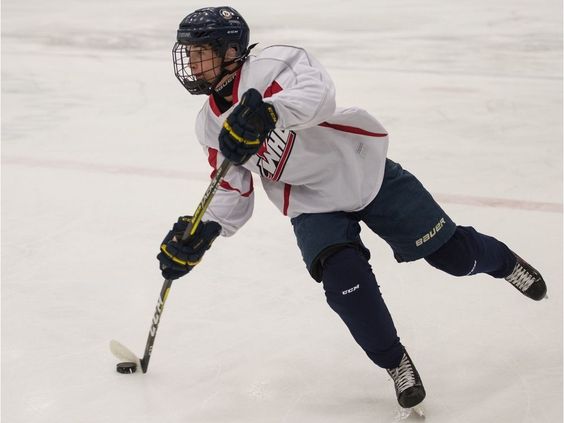 Despite being an American citizen, Braxton Whitehead can’t help but chuckle at the suggestion that he might have trouble weathering his first Canadian winter.

That was the least of his concerns when the highly touted forward chose to enrol at Athol Murray College of Notre Dame in Wilcox, where he now plays for the Hounds’ under-18 team (midget AAA).
Whitehead could have chosen any number of locales, but the native of Palmer, AK, knew he’d feel right at home in Wilcox.

Whitehead, 16, was a priority recruit for the Regina Pats, who selected him in the third round of the 2019 WHL bantam draft.

After signing with the club this summer, Whitehead determined that his short-term development would be in good hands at Notre Dame, a world-renowned hockey factory that has produced numerous NHLers.

Although he’s following a tried-and-true path to the next level, American players typically chose a different route. One of them is playing junior A in the USHL before committing to an NCAA school.

“That was definitely an option but I’ve had my mind set on going to the ’Dub for quite a long time,” said Whitehead, who attended Regina’s spring camp last year. “I think this was the best decision for me because I really trust the Pats’ organization. I’ve been here twice and it already feels like home. That’s one of the most important things to me.”

It also doesn’t hurt that the Pats landed 15-year-old phenom Connor Bedard, who’s set to debut with the team this season.

“It’s going to be really exciting to play alongside him,” Whitehead said. “There’s a whole bunch of things that made me choose the WHL but those were probably some of the biggest.”

Whitehead picked Notre Dame because it was “the right mix of academics and really high-level hockey.” He has also embraced the fact that living the dorm life in a small town makes it easier to focus on school and hockey.

“I think it’s important to have it all in the same place so that I don’t get distracted and I keep on the right path,” he said. “I’ve been doing really well at Notre Dame. My grades have been good and my hockey performance has been good too.”
Whitehead notched two goals and two assists in his first two games with the Hounds. His next action is slated for Friday night against the Regina Pat Canadians (7 p.m., Co-operators Centre).

The Saskatchewan Male AAA Hockey League opened its schedule on Nov. 1 — about five weeks later than usual — due to COVID-19.

“I was really worried that they were going to keep postponing and postponing until maybe they’d even cancel the season altogether,” said Whitehead, who scored a power-play goal and a short-handed marker in his debut — a 5-2 win over the Swift Current Legionnaires.

“When I scored my first goal, it felt like ages since I had done that. I forgot what it felt like. It was a big sigh of relief.”

It wasn’t a bad first impression, either.

“He does a lot of things very, very well,” said Jeremy Mylymok, Notre Dame’s director of hockey. “He’s not flashy but he makes spectacular plays at times with no-look passes and deception. He’s sneaky fast. He’s not a guy where you watch him explode and you think he’s the fastest guy on the ice but, watching the game, he never gets caught and he’s always going by guys. He’s a very elusive player. Part of what makes him that way is his hockey IQ is real high.”

After playing minor hockey in Alaska, Whitehead moved to Pittsburgh last season — along with his mother and sister — so he could join the Penguins’ elite 15U team.

Heading into this season, Whitehead wanted to play at the highest level possible to prepare him for the WHL. Not only did Notre Dame fit the bill, it’s beyond what he had hoped.

“It actually blew my expectations away,” he said. “I’m really happy with where I’m at. I definitely think this is the best place to be to get me ready for the ’Dub.”

Whitehead was initially worried that the WHL might not have a season due to COVID. That would have been a huge disappointment since he’s expected to get into some games with the Pats, who are slated to open their belated schedule on Jan. 8.

“When I heard there was a start date, I was really relieved,” he said. “Having close proximity to the Pats is another one of the best things about being here in Wilcox. It’s probably the best situation for coming in to help out the team if somebody gets hurt.”

Although he’s eligible to play in the WHL full-time this season, it’s expected that Whitehead will need another year of development before officially joining the Pats.

“He’s already a very intelligent player,” said Mylymok. “He’s going to play in, I think, one of the strongest (under-18) leagues in North America and it’s going to prepare him for the Western league. The biggest thing for him is going to be the off-ice (component), just getting stronger. He’s going to be a very interesting player to track as he goes from a kid that grows into a man. It’s going to be fun to watch him progress.”
Whitehead has a unique connection to Mylymok, who played university hockey at Alaska-Anchorage and still has contacts in the area. He heard good things about Whitehead in the recruiting process and is already impressed with him as a person and a player.

“He’s a great character kid — very classy and a very low-maintenance person as a teammate and a guy you want on your team,” added Mylymok. “I think he’s a player that understands why he’s here and what he needs to do to take that next step. You don’t go from Alaska to Wilcox unless you’re a pretty driven kid. That’s going to help him not just in hockey but in life.”