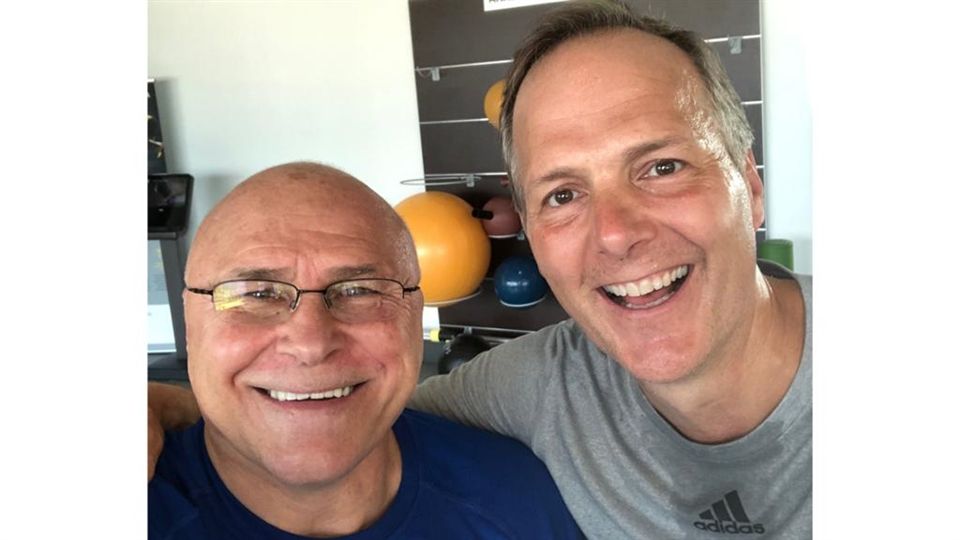 Trotz of Islanders, Cooper of Lightning reminisce about special time at Notre Dame

The Eastern Conference Final between the Tampa Bay Lightning and New York Islanders has been must-watch TV in the cottage of Dennis Ulmer just outside of Regina, Saskatchewan.

A former student, longtime hockey coach, teacher and administrator at Athol Murray College of Notre Dame, Ulmer has a personal interest in the best-of-7 series, which Tampa Bay leads 2-1. Game 4 is at Rogers Place in Edmonton, the hub city for the conference finals and Stanley Cup Final, on Sunday (3 p.m. ET; NBC, CBC, SN, TVAS).

Islanders coach Barry Trotz and Lightning coach Jon Cooper each attended the private prep school in the tiny village of Wilcox, Saskatchewan (population 264, according to the 2016 Canadian Census), about 25 miles south of Regina.

Ulmer coached Trotz, a 1981 graduate and a tenacious defenseman and captain on the Hounds' AAA midget hockey team. The retired 68-year-old never coached Cooper, an inquisitive hockey, football and lacrosse player from Notre Dame's Class of 1985, but taught him in his 12th-grade English class.

"You're not cheering for either one," Ulmer said. "You're just hoping for a good game, and you know that the teams are going to basically buy in. … I'm just so proud of both of them."

There's plenty of Hounds pride in the series. Islanders forward Jordan Eberle and third goalie Christopher Gibson and Lightning defenseman Braydon Coburn and backup goalie Curtis McElhinney also attended Notre Dame, which was founded in 1920 by the Sisters of Charity of St. Louis and Father Athol Murray, the charismatic Canadian Catholic priest who ran it until he died in 1975.

Trotz and Cooper spent some time reminiscing about their Notre Dame days when they ran into each other last week in the hotel gym in Toronto, the Eastern Conference hub city through the second round of the Stanley Cup Playoffs. Afterward, the coaches took a selfie together that they sent to their alma mater.
"Notre Dame is one of those places I think you find out a lot about yourself," said Cooper, who wore a Hounds cap during a video conference call with the media Thursday. "I always say you go in there a boy and you leave a man. It was different in the early '80s than it is today, but I think the message is still the same: It's 'Once a Hound, always a Hound' regardless of what year you went there."

The Hounds had 16 alumni play in the NHL this season and three coaches in the League -- Cooper, Trotz and Rod Brind'Amour of the Carolina Hurricanes. Ulmer's son, Jeff, worked as coordinator of skill development for the Arizona Coyotes, but his contract was not renewed for next season.
Brind'Amour is among the more than 180 alumni who were selected in the NHL draft and/or played in the League. In 1985-86, the Toronto Maple Leafs featured an all-Notre Dame-alumni "Hound Line" of Wendel Clark, Gary Leeman and Russ Courtnall.

Trotz believes developing leaders is one of Notre Dame's strengths.

"I think because it's a community," said Trotz, who grew up in Dauphin, Manitoba. "A lot of the things that Father Murray believed in are to this day still talked about and used. There is a lot of pride there. There is a lot of understanding. … It's a lifestyle and it has a code, and that code teaches young men responsibility, leadership and all those things."
Cooper and Trotz also faced each other in the 2018 Eastern Conference Final when Trotz coached the Washington Capitals. Washington won in seven games and went on to win the Stanley Cup.

Last season, Notre Dame alumnus Jaden Schwartz won the Cup with the St. Louis Blues. Either Cooper or Trotz will advance to the Cup Final this season along with two of their players.

Those currently at Notre Dame always pay attention when alumni contend for the Cup. With classes and hockey practices resuming Thursday after a six-month break because of the coronavirus, the excitement is building in Wilcox.

"Anytime our guys are still playing in the playoffs and get closer to the Stanley Cup it's always magnified a little bit," said Jeremy Mylymok, Notre Dame's director of hockey and an alumnus from the Class of 1990. "To have those two guys go head-to-head, and you also have McNabb in Vegas, you have McElhinney, Coburn and Gibson with the Islanders, and Eberle, it's a good storyline.

"As a program, we're proud of all our guys but, obviously, those guys are tremendous leaders and they're well respected amongst their peers."

When Ulmer coached Trotz, he noted qualities that suggested he'd make a good coach someday.
"He was a very, very good leader," Ulmer said. "Not a big fella (5-foot-9), but just very, very solid and a bit of a bulldog. He just never, never stopped. And the other guys followed."
Ulmer remembers Cooper as a perceptive student who always wanted to learn.

"Jon was just really, really interested, a very smart individual," Ulmer said. "He played on one of our lower midget teams, but he played to the best of his ability and did very well. He ended up getting a lacrosse scholarship (to Hofstra University). He helped manage and was a stick boy for the AAA hockey team, so he was always in a situation where he could learn and pick up things."

Gerry Scheibel, a teacher, coach and administrator at Notre Dame for 45 years before retiring in 2007, and the school's historian until this spring, said he never had Trotz in any of his classes but remembers him well. The 81-year-old coached Cooper on the football team and taught him in his 12th-grade history class.
"Jon Cooper, at the time he was here, he was just another pretty face in the crowd," Scheibel said. "He did not make the midget AAA hockey team. He was sent down. … He's obviously grown and met his potential in life."

Cooper, who left his hometown of Prince George, British Columbia, in 1982 to begin attending Notre Dame in 10th grade, considers being cut from the midget AAA team one of the many life lessons he learned at the school.

"It's the first time you kind of get knocked down if you get cut from a team," Cooper said. "First time that had happened to me in my life, and you wonder how you're going to deal with that. It was not just the athletic part, but the school part of it and having to acclimate with new friends, new environment.

"But the school did such a good job at keeping you engaged, evolved and really the school became your team."
And it's remained their team long after they graduated.
Cooper, Lecavalier and Coburn participated in a panel Notre Dame held with hockey families in Tampa, Florida, two years ago. Trotz spoke at Notre Dame's commencement ceremony in 2014 and did a Q&A with incoming recruits and their families on a Zoom call two months ago.

"There's a magnetism to our school that you can't explain," Mylymok said. "It's like winning a championship. When you ask people, 'What does it take to win a Stanley Cup?' if they haven't won before, they might think they know or they've heard, but until you've won, you don't really know. And Notre Dame is the same way.

Until you go through it as a student here, you're not sure what to expect, but once you go through it, that's the one common bond all the Hounds have."
Full Article - https://www.nhl.com/news/barry-trotz-jon-cooper-learned-life-lessons-at-athol-murray-college-of-notre-dame/c-319001964