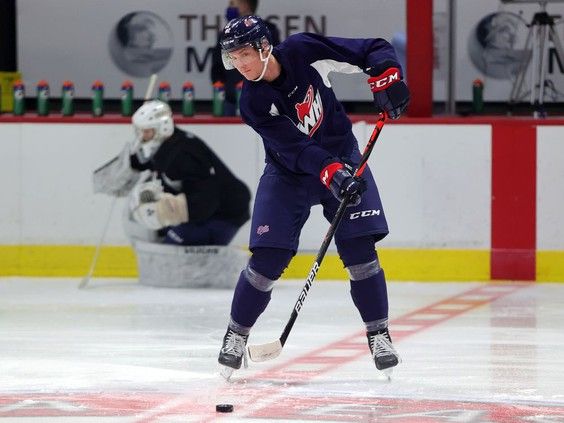 Drew Englot wants to play it by the book in his second season with the Regina Pats.

The 18-year-old forward is a bit of a throwback who has quickly developed a reputation for playing the right way — fast, hard and gritty.

Englot is also a student of the game who took advantage of the Pats’ recent quarantine to catch up on some reading. One of his favourites was the autobiography of Nick Kypreos, a former NHL tough guy from a bygone era.

“I love the different stories that he has from back when he played in the NHL,” Englot said recently. “Some people would probably never be able to play in that type of era with all the hard-nosed coaches and teammates and how many enforcers there were. It was pretty much the biggest, baddest team that was going to win.

“It’s crazy to see how much the game has changed.”

Although hockey has evolved into a game of speed and skill, there will always be room for an honest blue-collar guy like Englot, whose character and work ethic are his calling cards. The 6-foot-2, 191-pounder also skates well for a bigger guy and showed flashes of skill last season, notching 12 goals and 18 points in 56 games en route to being named Regina’s top rookie.

Englot’s performance was a welcome surprise for the Pats, who acquired him on May 6, 2019 from the Lethbridge Hurricanes for a fourth-round bantam pick in 2022.

That under-the-radar deal has turned into quite a bargain.

“I was really fortunate to have a good season,” said Englot, who’s from the tiny farming community of Candiac (southeast of Regina). “Being my second year in the league, I expect a little bit more (from myself) — a little more responsibility. I have some goals for myself but I definitely want to stay with my game because that’s what made me successful.”

Heading into Wednesday’s clash with the Swift Current Broncos, Englot had one assist in three games this season. The versatile forward started out on right wing with Connor Bedard and Carson Denomie before moving to centre between Sloan Stanick and Zack Smith.

Englot’s willingness to do the dirty work makes him a valuable checker as well as a good complement to offensive-minded linemates.

“I was never a guy who got a lot of points,” noted Englot. “My second year of midget was when I scored more goals (21 in 43 games with the Notre Dame Hounds). But up to my first year of midget, it would be five, six goals a year. When I came here as a rookie, I didn’t worry about points. I just wanted to play games, move up in the lineup, show what I could do and work hard. I ended up getting some points out of it so why change something when it’s working.”

Although his offensive game isn’t a primary focus, Englot is continuing to work on his skating and puck-handling skills in hopes of capitalizing on more chances.

It’s all part of a natural evolution as he gains more experience in the league.

“He just has to play the way he played last year, make less mistakes, learn to play with the puck and make plays with his linemates,” head coach Dave Struch said heading into the season. “The things he did last year were signs of a good 200-foot player. He’s really hard to play against and committed to being a leader.”
Struch took notice of those leadership qualities last season, even though Englot was still a rookie trying to find his way in the league. Now he’s more established and an important voice in the dressing room, as evidenced by the brand new ‘A’ on his jersey.

“With his character and personality on and off the ice, he’s a leader of this team still at a young age,” Struch added. “There are things in his repertoire that every coach likes and every teammate should look forward to being around. He has energy and he’s very comfortable to speak up in front of the group. In a short period, Drew has come a long way in that regard and that’s why he’ll be one of our leaders.”
Article - https://leaderpost.com/sports/hockey/regina-pats/drew-englots-blue-collar-approach-has-made-him-a-leader-with-the-regina-pats
Back